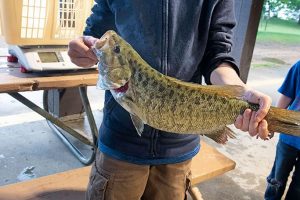 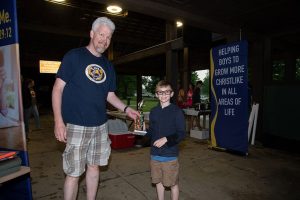 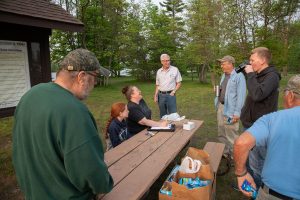 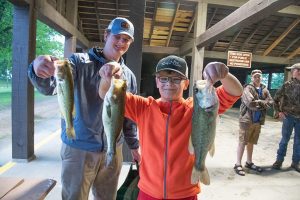 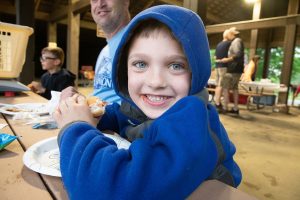 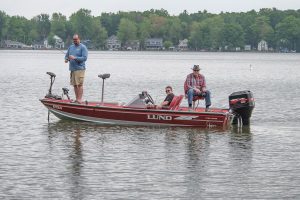 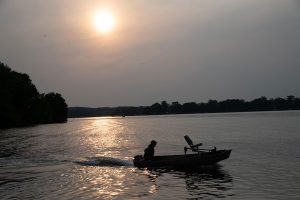 Forty-three fishermen participated in the tournament, and several thousand dollars were raised for the Calvinist Cadet Corps.

This is the seventeenth consecutive year for the tournament, which brings fishermen from near and far together in a friendly competition.

The weather was good for fishing, with cloudy skies and cool temperatures – at least for the first 3.5 hours of the 4-hour tournament. Shortly before noon, rain caused a few folks to head to shore a little earlier than planned, and the rest of the activities took place in the relatively calm and dry environment of the park’s picnic shelter.

Once off of the lake and out of the rain, participants presented their catch to be weighed and counted.

While no fish were harmed in the production of lunch, many hot dogs and pounds of barbeque pork were quickly eaten. Several pieces of cake and dozens of cookies were also cheerfully consumed by tournament participants.

After lunch, Executive Director Steve Bootsma presented trophies and awards to those who caught the most and/or largest fish.

Congratulations to young fisherman Landon P. for winning the largest fish competition with a catch that weighed in at 2.65 pounds.
Fred R. and Ken M. shared the prize for bringing in the most fish in one boat (over 80), and Mark A. caught 43 fish to win the single-fisherman quantity prize. There was some discussion as to what percentage of the counted fish would qualify as “keepers,” though this was primarily in the form of good-natured ribbing.

The “Broken Pole” award was given to a gentleman – nameless here for propriety’s sake –  who regaled us with the story of how his hook became embedded in his backside. While perhaps more of a cautionary tale than a fish story, no one denied that our hapless hero deserved the prize.

The annual event was yet another successful one facilitated by Corps staff, and we especially thank Kim K. for her efforts in making the fishing tournament happen.

The Calvinist Cadet Corps will certainly be putting on this event next year, and we’ll be sure to give you plenty of notice so you can join us then.

Pictures and video produced and provided by Art and Media Director, Robert deJonge.